A Tradition of Excellence Since 1964

It is the mission of the Athletic Training Education Program at Minnesota State University to provide dedicated, effective graduate teaching, scholarship, and service to our students and to the athletic and physically active populations of the university, the community, the state, the region, and the global community. 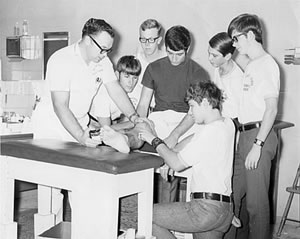 Originally approved as a 26–credit (quarter credits) undergraduate curriculum minor by the National Athletic Trainers Association in 1969, (along with Indiana State, New Mexico, and Lamar University as the first four programs approved), the primary objective of all approved curriculums was to educate the teacher–athletic trainer for employment at the high school level. This minor could be coordinated with any teaching major. To complete the minor, the student athletic trainer had to have a minimum of two years (six quarters at the junior–senior level) of supervised experience in the co–ed athletic training setting, encompassing a minimum of 900 clock hours evenly spread over the six–quarter period. In the mid–70's, the credit requirement was increased to 29 quarter credits. With the explosion of information in the field of sports medicine, it became difficult to even come close to covering the necessary educational material and give practical hands-on experience. The Minor was discontinued in 1986.

Beginning in 1982, a 67–credit (quarter credits) major in athletic training was initiated. By 1986, the major was increased to 72 credits and officially approved by the National Athletic Trainers Association. In 1992, the major was increased to 77 quarter credits. In addition to the course requirements, the student athletic trainer competed a minimum of 1,200 clock hours of supervised experience in the co–ed athletic training setting evenly distributed over a three year (nine quarter) period. A minimum of twenty–five percent of those hours were with contact/collision sports. The student was encouraged to work toward an additional major (teaching or non–teaching), a minor and/or complete prerequisite courses leading to application for admission to a physical therapy program or medical school. Athletic Training was approved as an Allied Health Care Profession by the American Medical Association on June 24, 1990. The Mankato State University Athletic Training Program then underwent the accreditation process by the Certifying Agency for Allied Health Education Programs (CAAHEP) of the American Medical Association during the 1995–96 academic year. 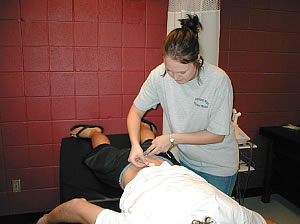 The current program is housed in a state–of–the–art facilities in Highland Center and the Clinical Sciences Building. The Highland Center facility was completed in October of 2002 and serves as both an academic laboratory and as a health care facility for intercollegiate athletics. The program remains CAATE accredited with the next comprehensive review by the CAATE will occur in 2027–28. The current faculty consists of Dr. Theresa Mackey Skrien (Program Director), Dr. Patrick Sexton, and Dr. Liz Drake, (Clinical Education Coordinator), who teach the required clinical and didactic coursework. Athletic training students obtain supervised clinical experience both on– and off–campus.