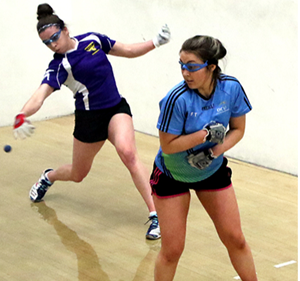 Ciana Ni Churraoin (shown on the left in the above photos), is ranked as the No. 2 female handball player in the world. She came to Minnesota State Mankato from Ireland and is a graduate student in the Exercise and Sports Psychology program.

When Ciana Ni Churraoin was completing her undergraduate degree in her native Ireland, she had no plans to travel to the United States to continue her studies. But then Minnesota State University, Mankato professor Michael Wells reached out to her with some important information: the University had a thriving handball team.

For Ni Churraoin, who has played handball for 16 years and is currently ranked as the No. 2 female handball player in the world, that was a major draw.

“When this opportunity came up, I thought it’d be silly not to take the chance to experience something new,” Ni Churraoin said. “While I was really interested in doing the program, another huge thing for me was to be able to play handball here. They kind of went hand in hand.”

Ni Churraoin grew up in Galway, Ireland and started playing handball when she was seven. She earned a spot on the touring Irish team when she was 13 and continued to consistently earn top spots in her division during national and international championships.

As an undergraduate, she studied Irish language and physical education, with plans to become a teacher. She also kept playing handball. However, an ACL injury in 2017 put her on the sidelines for nearly a year. After she was cleared to play in early 2018, she won her division of the World Handball Championships.

Ni Churraoin was accepted into the Minnesota State Mankato’s Sport and Exercise Psychology graduate program, with the opportunity to start her studies in 2018. However, she faced another hurdle: studying at the University would be much more costly than if she stayed in Ireland.

Michelle McAlarnen, Ph.D, CMPC, Assistant Professor of Sport and Exercise Psychology, said she and her colleagues across the College worked together to find a solution to help meet Ni Churraoin’s needs, ultimately helping her apply for a graduate assistantship through the College of Allied Health and Nursing.

“This is a good example of how we can work across programs and departments to support programming, opportunities and students along the way,” McAlarnen said.

The assistantship pays for her tuition and provides a stipend for rent and other expenses. In return, Ni Churraoin works at the University’s Center for Sport and Performance Psychology, assisting faculty and mentoring undergraduate students. She also coaches handball at the University and works with area high school students – sometimes even those who are touring campus.

“Ni Churraoin has gotten great mentorship and continues to play handball, and we have the opportunity to have her as part of our program,” McAlarnen said. “She’s done a really nice job mentoring students who are first-years and being a connector with some community programs we do.”

Working alongside her coach, Ni Churraoin has also been working to bring awareness to the University’s robust handball team, sharing her experience with fellow handball players at tournaments and encouraging potential students—both American and international—to come to Minnesota State Mankato.

“Many people don’t know about our handball program, but you could ask any collegiate player, in Canada, Ireland or the United States, and they definitely know about Minnesota State Mankato,” Wells said. “Having a national and international reputation is great for the University.”