Back in the Bullpen

Three decades after he was a student worker, Jeff Maurer returns as an instructor 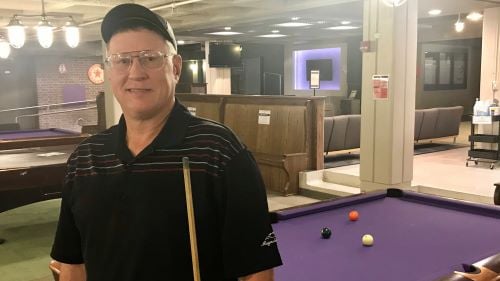 Maverick Bullpen a couple of years ago, the new billiards instructor felt like he was coming home. “The place has a lot of memories,” Maurer said.

Back in the ‘80s, Maurer worked in the Bullpen as a student. “Dan and Bonnie Krueger ran the gaming area back then,” the Finance grad recalls, adding that there was an employment perk he took full advantage of: "If you worked there, you got to shoot pool for free".

Maurer's hours of practice paid off with success on the amateur competitive billiards circuit and—some 30-plus years after he last clocked in—an invitation to work in the Bullpen once again.

In-person During the Pandemic

Maurer credits his return to “pure luck.” A mutual friend told the manager of the Bullpen that Maurer would be a good fit to help teach billiards to students. He applied and was hired as an adjunct instructor in the Department that houses Health and Physical Education. “I love the interaction with the kids,” he said. "Everyone has been patient with me as a newbie teacher."

Maurer may be new to the job, but his students say he’s a natural.

“He has the ability to break down even the simplest things so that we can understand them,” said Brett Haeder, a Law Enforcement major expecting to graduate in 2022. “I improved my game tremendously thanks to him.”

“I really enjoyed Jeff,” said Tate Horgen Construction Management, ‘21. “He did a great job of helping us get to know each other in class. He wanted us to have fun.”

Maurer confirms that fun is among his main learning objectives for the class. “I want the kids to understand the game, but I also want them to have a good time,” Maurer said. “Pool is social, and I want to promote that interaction.”

The social aspect of the game took on new meaning during a global pandemic. For many students, Maurer’s was the only class that didn’t take place online.

“It was amazing to have an in-person class,” Horgen said. “I was so happy to be back interacting with people.”

While COVID-19 protocols—including reduced class size and frequent equipment sanitizing—are a sign of the times, the lessons Maurer teaches are timeless.

“Pool is a throwback,” he said. “The fundamentals and etiquette haven’t changed. I teach the basics of billiards: 8-ball, 9-ball, straight pool.”

He also teaches some tricks of the trade—or tries to.

“Even after class I’ve tried to do some of the tricks Jeff showed us,” Horgen said. “I can’t figure out how he does them.”

Matt Kujawa, a Finance major, said seeing Maurer’s trick shots was his favorite part of class. “We’d all freak out watching him,” Kujawa said. “He’d show us up a bit.”

And though he never mastered any of those showy shots, Kujawa said his skills improved during the course. “I definitely got better,” he said. “I could see my progress.”

And that’s Maurer’s favorite part of being on the teacher’s side of the pool table.

“It’s fun to see how much the students improve with a little bit of instruction,” he said. And, rewarding to know some of his students will leave his class with a new appreciation for a game that’s brought him much joy.

“I’ll have students come down after they’ve finished the class to tell me that they’ve beaten their father in a game. I hope what they learned in class will stick with them. Where they want to take it is up to them.”