Sigma Theta Tau was founded in 1922 by six nursing students at the Indiana University Training School for Nurses, now the Indiana University School of Nursing in Indianapolis, Indiana. The founders chose the name from the initials of the Greek words, "Storga," "Tharos" and "Tima" which mean, "love," "courage" and "honor." Modern nursing was barely 20 years old when Mary Tolle, Edith Moore, Marie Hippensteel, Dorothy Garrigus, Elizabeth Russell and Elizabeth McWilliams met to found a Society to advance the status of nursing as a profession. They recognized the value of scholarship and the importance of excellence in practice, and wanted to build a framework to encourage future leaders to effectively improve health care. Sigma Theta Tau was the first organization in the U.S. to fund nursing research. In 1985 the Society became incorporated as Sigma Theta Tau International, Inc., to support a global community of nursing scholars. 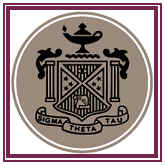 The seal of this Society is a lamp surrounded by a circle containing the name and date of the founding.

The coat–of–arms symbolizes the ideals of this Honor Society. The eye represents wisdom and discernment. The stars represent our six founders. The scroll is that of learning, and bears the Greek words, Storga (StorYEE), Tharos (THARos), Tima (TihMEE), which mean love, courage, and honor. The pillars of stone at the right and left denote service, professional endeavor, and strength of leadership. The lamp represents the lamp of knowledge. The words on the banner are "Sigma Theta Tau," the name of this International Honor Society.

The key is the symbol of scholarship. The cup denotes the satisfaction of professional life. The circle of gold with its six stars represents our six founders. The letters in black – Sigma Theta Tau – represent our charge: Storga (StorYEE), Tharos (THARos), Tima (TihMEE), which mean love, courage, and honor. The lamp is the lamp of learning.

The colors are orchid and fuschia. The flower is the orchid.