The Impact of Stuttering at Work: Challenges and Discrimination

The Impact of Stuttering at Work: Challenges and Discrimination

by Marshall Rice and Robert Kroll
from Canada

Many research studies have shown that people who stutter face challenges in the workplace. Specifically, research has shown that people who stutter are viewed as being less competent than non-stutterers (Silverman and Paynter, 1990), vocationally handicapped (Hurst and Cooper, 1983), less promotable (Rice and Kroll, 1994; Perott, 1994), negatively assessed by superiors/employers (Hohmeier, 1985) and subject to discrimination the workplace. Finally, in recent large-scale study, Klein and Hood (2004) surveyed 232 members of the National Stuttering Association in the United States and found that the respondent's believe that stuttering has a negative impact on their employability and job performance.

In the research reported here, we replicate the Klein and Hood study but with a more representative, international sample. In addition, this research study asks respondents additional questions about instances of discrimination that they might have faced in the workplace. The current study examines 412 people who stutter worldwide and includes both those who have been, and have not been, members of self-help groups.

Respondents were recruited to complete the online survey in a number of different ways. These included:

The survey asked respondents questions about the respondent's personal experiences and opinions being a person who stutters in the workplace. All question used a five point scale question with the following anchors (1= strongly disagree, 2 = disagree, 3 = neutral, 4 = agree, 5 = strongly agree).

2.1 Impact of Respondent's Stuttering in the Workplace 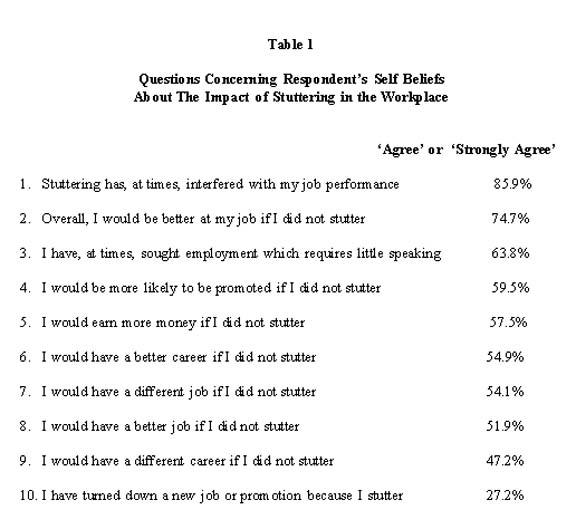 It appears that the impact of stuttering has a negative impact in two broad areas/factors. First, the results in Table 1 show that respondents who stutter face limitations in the workplace due to their own actions. For example, approximately 64% of respondent's agreed with the statement 'I have, at times, sought employment which requires little speaking'. In addition, 27.2% of respondents 'turned down a new job or promotion' because of their stuttering. These results indicate that many stutterers hold themselves back from employment opportunities. Secondly, the data also show that stutterers face challenges in the workplace due to the actions of employers. For example, 59.5% of respondents agreed with the statement 'I would be more likely to be promoted if I did not stutter'.

2.2 Discrimination in the Workplace

The survey also asked respondents four questions about incidences of potential discrimination in the workplace due to their stuttering. Results are as follows: 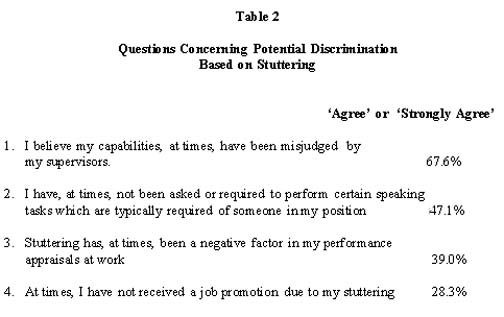 As seen in Table 2, people who stutter face challenges in terms of discrimination in the workplace. Approximately two-thirds of the respondents (67.6%) agreed that their 'capabilities have been misjudged by their supervisors'. Almost one-half of the respondents (47.1%) agreed with the statement that, at times they have 'not been asked or required to perform certain speaking tasks which are typically required of someone in my position'.

Perhaps most disturbing is the finding that 28% of the respondents reported that, at times, they have not received a job promotion due to their stuttering. This finding points to significant discrimination and challenges faced by people who stutter.

Hohmeier, Jurgen. (1985). On the vocational situation of people who stutter. Full report published in 'Der Kieselstein'

Hurst, Melanie I. and Cooper, Eugene B. (1983). Employer Attitudes Toward Stuttering, Journal of Fluency Disorders, 8, 1-12.

Rice, M. & Kroll, R (1994). A survey of Stutterers perceptions of challenges and discrimination in the workplace. In C.W. Starkweather & H.F.M Peters (Editors), Proceedings of the First World Congress on Fluency Disorders, 559-562.

After the conference threaded discussion is no long accessible, additional correspondence about this paper can be addressed to: